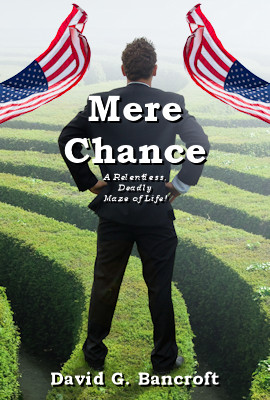 There are those times in life when an unexpected encounter occurs... a “Mere Chance” meeting that might mean nothing or result in something else ... even unknowing diabolical results.

And that is exactly what happens to the brilliant Bryan Ashford in this ... Greatest Generation story ... to achieve the American dream! Set during the aftermath of World War II and the emergence of the Cold War, Mere Chance is a riveting, action thriller involving an ongoing struggle between the unsuspecting Bryan Ashford, formerly assigned to the Manhattan Project, and the ruthless, deadly Angelo Martino, a powerful Mafia leader.

Intermixed with Bryan's quest for corporate success and the behind the scenes manipulation of Martino is political intrigue at the highest levels encompassing espionage, tragedy, revenge, and death along with Ashford's personal relationships including with his devoted wife and a famous movie actress.

The reader will also experience many aspects of the very patriotic Greatest Generation ... that every succeeding generation should never forget.

You can order Mere Chance at the following retailers with the understanding that suggested retail prices for the paperback and eBook are offered at discounted pricing by retailers at their discretion and timing.